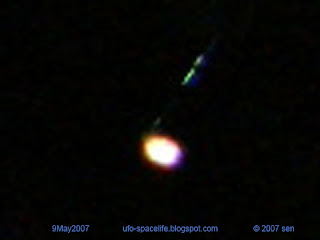 
1976 Tehran UFO incident is considered as an example of “alien mechanic craft” for some UFO researchers. “The incident is particularly notable for the electromagnetic interference effects observed upon aircraft”, but this kind of effect can also be created by the alien’s biologic UFO too ( UFO form by few energy beings), which could include shooting out an light beam. without knowing what the UFO may be, the definition and conclusion will be too far from the truth.

If I am the fighter’s pilot, I would not chase any UFO larger than the size of a basketball.
Posted by Star at 11:34 PM