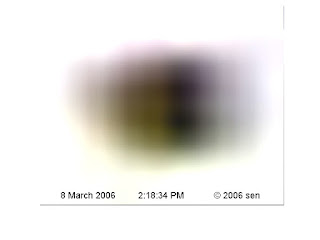 Two knights followed grasshoppers that jumped up to the sky. The fourth picture that I captured from the team of Martians is a large unknown green image (if it is real, sometimes a few small sized space-lifes will form a shape that looks like a creature to protect themselves). It has a squid body and shark head. Its head faces those fellows below him. And it opens its mouth, looks as if it’s surprised since so many unusual visitors come tonight.

The bird is the fifth photo that I captured. Their flying attitudes are different than the grasshoppers and knights. Their body declines about 30 degrees backward from vertical. They don't open their wings to fly. Both have strong, long legs which are almost 1.5 times longer than their body. Their 4 (?) Claws look powerful and large. Their head looks smaller compared to the feet (not to scale). Both figures are similar to an ostrich’s, but the neck is much shorter.

On their back, they both have 4 or more baby birds, the baby birds put their heads outwards. One big standing bird's head looks like an eagle, its beak looks like a hook; the other's head is just like an ordinary bird's which has small short beak. They keep a long distance from each other. The front one is white and bluish in color. The lower one is
Brown red and greenish looked.
Star
Posted by Star at 1:02 PM