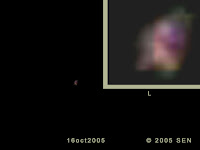 
(continued from the last letter about more humanoids come)

4) 30 Aug 2005, two pumpkin head humanoid figures in one picture. they are wearing large sized Lotus shaped shoes ( in my collection, another humanoid all can fly by himself, no craft is needed.)
one looks like a female because it has a pink top and puffed up cheeks. The male has a
big, round, fat face with no hair. Their hips and legs are skinny. In the picture, both


were holding a shining colored pet in their arms. They appeared on the same spot that

Photo 2. One beautiful shining red color old man (only able to see his face ), with hat
That has many yellow and green patterns Appeared. he is floating on air above my tent.

Photo 3. One looks very similar to the "ET" movie's creature, but with a much thicker neck ,


wider mouth and back ward chin, it has two big eyes. appeared behind the
The golden pop up rectangle disk.