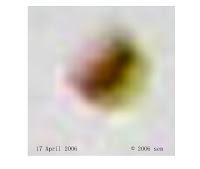 Some of UFO pictures & videos that I captured shows that a kind of duck-egg sized objects are very close to me. They come quite often (November 2005 to March 2007) they hover on top of my house or on the roof.

I am lucky to capture some of their pictures; they clearly show their 'maneuverability'. In the pictures you can see that they release energy from their bodies (especially, when a pair or more those object fly together). Under the sunlight such energy looks like light or has a wing-shape and they use this energy to rise, turn and control their flying direction in the air.

In our world when the flames shoot down then the rocket can go up (every action has an opposite and equal reaction). But for those space lives, when they want to rise, their bodies release energy in the same direction (up) -------- Opposing our physical laws. That is amazing, isn't it?

I hope one day we will solve this mystery. We may learn something new from that. By the way, those objects are invisible.