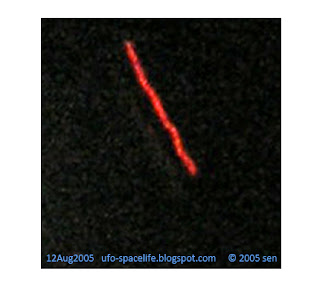 Red mass is one of my early night’s visitors which happened on 12Aug2005. It is most frequent visitor in my 8 years encounter history. Evidence shows that this type of UFO has come more than a hundred times for visiting or spying. As I gathered large numbers of the information about it, I could study this object intensely.

Red mass could come singular or in a group of several or more than 10. The singular red mass might shape shifted from irregular clump to Sphere or tube, boomerang or even triangular. The group of red masses could arrange their position to a line, triangle, loose or cluster. Red mass sometimes has semi-translucent black color cloak on itself that depend on their energy state. That is what we usually observe of those black triangle and black boomerang.

But many alien species popping out or hiding from the UFO (so I could identify them). From beginning to today Red mass only shows their original look, which made me wonder they are the primitive life form or intelligent alien’s matter. As they like to contact with human in a proximate fashion, expressing emotion & sense, and tremendously flying speed & nonstop of visiting, I am still not sure whether they the independent alien nature living thing or the alien bio-drone spyware.