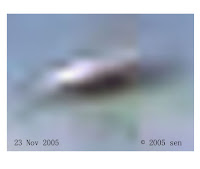 Of my encounter with various types of space-life, their shapes included micro- organisms, insects, reptiles, and amphibian type; Humanoid fingers appeared from Martians (?), Pumpkin head men to the golden big bird head figure. Until now, I still cannot figure out what kind of creatures some of them are or where they come from. Because most of them only came once and did not leave any trace that I can study (except the dog, Dragon ……etc, I have another document about them)

But the ones I named:…… "the simple life forms" who I always captured with my camera; they really make me interested, because they come so frequently and have such a large population from what I have known. Now I am trying to find out if they have come from another place? Or if they were formed on earth like us, or if they were formed even earlier than us? Are they sharing the same space with us? What is the effect on our environment?

I have no religion. I do not believe in superstitions and mystic. But I understand ratiocination and consequences. My belief is that: All life have some chance to live in this universe. In the universe it is not strange that life could have been formed in many different environments and all life formed in their own different condition should have their own ability and strengths .

Perhaps they have formed with another materials or molecular structures, or their DNA made with non-earthly physical matter such as electro- energy type. This is why they can hide themselves in our world, or they just appear for one second and disappear the next. They can fly in our air without wings or crafts. They may have a glowing light around their body........ It doesn’t mean that they are paranormal or supernatural. We can’t use our view to judge or expect them. We only learn from discovery.

This is a new subject--------" The Science of the non-earthly physical world ", No mystery and paranormal.