(this sighting reported to MUFON)
the top photo was from two continuous pictures which taken 4 March 2010 2:39 PM from my back yard, the first photo showed the blue color triangle ufo and it's passengers, the next picture showed three light balls pop out side by side , the blue triangle shape was disappeared. 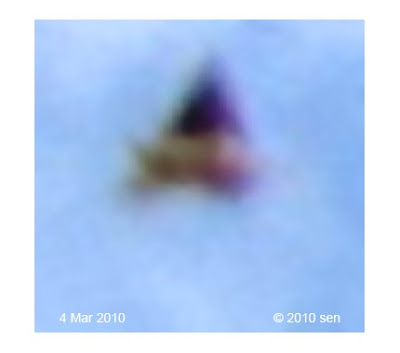 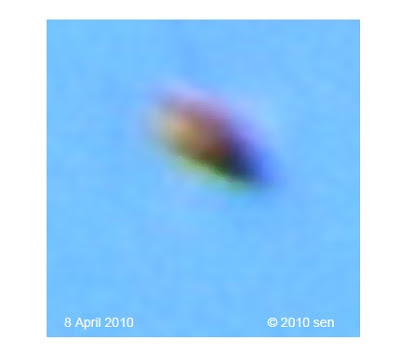 (this sighting reported to MUFON)
People have studied the Hessdalen Lights, St. Elmo's fire, ball lighting, foo fighters……. etc for a long time. they been described as: “unexplained”, “erratic”, “aware in some way”, “have consciousness, even intelligence in their behavior”. So they can be identified for elementals, ghost, fairy, or spirits. Now I am certain they are the simple forms of alien ( or non physical) life. also due to their character and performances, they fit into the advance type. Their sizes are mostly small from 5 - 30cm.

The ordinary type have varied size from tiny to giant. I have couple this photos which showed their size are not less than 30-50 meters in diameters. The giant ordinary types do not usually act too close to the human beings, they fly high or sometimes jerkily around in the sky.

Ball lightning has been a puzzling science, I hope my discovery will solve the mystery. For majority researchers, ufology is the subject of about high intelligently alien and their technology or the other endless hypotheses, but in the not so longer futures they will understand most objects from space are genuine matters of astrobiology.

Newer Posts Older Posts Home
Subscribe to: Posts (Atom)
All pictures in the blog captured by myself from my backyard.
This site is not fiction, legend or history of another person. This is my real encounter starting from 2005. Encouraged by my friend, a UFO researcher and scientist, I started this blog. If I am not telling the true, I don’t know when another person will meet such a large scale contact again.
my youtube channel: http://www.youtube.com/ufospacelife
my blog in Chinese: http://ufospacelife.blogspot.com/ contact: sam.nz109@gmail.com