about the UFO photos 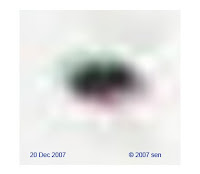 There are three type of ufo pictures people usually captured.

2. Semi-detailed: part of the object’s figure appears from the broken energy field or glowing light. But most of the figure is still covered by bright or blurry, dull energy light.

3. Exposed: object fully exposes itself which shows their colors, details of face and body may distinguish. UFO can be identified. Most of time, the picture shows their body, skin or figure emitting some kind of glowing light. Especially from the mouth and eye.

Every day people from all over the world captured many ufo pictures, video. Most them are belong to the energy shape type. Occasionally a few are the semi-detailed type. It seems the kind the photos will increase by new tech witch we use. The exposed types are very rare to get,except under some peculiar circumstance.That makes me wonder if there is any space law up there to restrict the aliens exposing themselves or their energy's level & manner in order to make them not show themselves immediately. In fact many curious space fellows always try to get close with humans. I have a lot of other pictures that finally backup this idea---------picture of alien interfering or star wars.
Star
Posted by Star at 2:21 PM