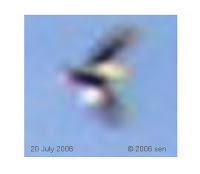 I just try to fit those figures to some suitable culture’s legends that I know, probably different legends has similar story………
* * *
I have few ufo pictures that look the same to the Stephenville lights, I think its just trying to tell people the same story: only a few UFOs are alien craft, others are just alien activity, most are simple life form, and some scientist may call them: weird life. But most important is those high and low intelligence beings, they are all working together. That is why they come on a large scale to show their faces to me. They have been hidden for 5-7 thousand years. Why they come back? I don’t know...
* * *
I think it’s a bit more serious than just interesting. Because our society may accept that intelligent humanoid aliens exist, they may hope to get some high tech from them. But we don’t know much about those animals or creature like beings. That is why I asked a scientist:” Should I inform the media. Will this news cause any impact to the world?”
* * *
Alien humanoid knows all those tricks; they will get report from other...........
Few researchers tried it before (sit a camera to catch it on film). Can’t get any result.
I can capture those pictures may be just by luck.
* * *
After nearly three years intense study, I have understood that we do not just deal with different humanoids; we actually have to deal with all sorts of alien life -------- belong to another world. So that is why not that simple!
Star
Posted by Star at 12:44 PM