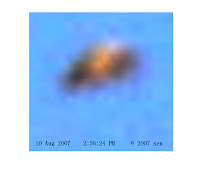 After I found so many strange images from the sky, I always tell people about my story.I also show my UFO photos and ask people for their opinions. Those people include ordinary people, professionals, businessmen, labour workers, social workers, wealthy people, scholars, UFO researchers, scientists and here is what they said:

Your photos are blurry, not one in focus.

Is there a laser show in your neighbourhood?

If those things are really up there, how can we human be secure.

Except if they stand in front of me, otherwise I don’t believe they exist.

You better send those pictures to scientists for their approval.

We never learned or were told that kind of thing in school.

I believe that your photos are unique & very important.

Don't know what they are. Don't look like "standard" UFOs.

I just don’t believe those things!

Forget those things, get back to reality.

Don’t send those pictures to me any more.

It’s almost taken 60 years for people to recognize that UFOs exists. How long will it take for people to understand what UFOs are? From the above opinions, I don’t think that it will be soon.
Star
Posted by Star at 11:49 PM