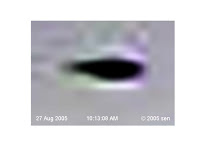 ( A letter to the UFO research group about another humanoid encounter)

Hi, everyone, (13 November 2006)
I got a night picture from 7th of September 2005, when an aero plane passed about 8 o'clock from south to the north. I rushed to the back yard to capture the aero plane trail.After I found the picture had a very large orange color image (two square meters)only a few meters distant from me, probably a couple of meters above my head.
The shape of the images looks have 2 big human heads and a few small head shape image behind. The 2 big heads were form with few orange color air bubbles, looks very lumpy and they had green eyes on their faces. The eyes are the only identification for a humanoid face. Their faces also look like they have some red spots. It looks like they got shocked when I ran to the backyard.
They give the impression that they are not nice and friendly (?) so I called them devils, but I don’t know exactly how dangerous they are. Then last week I borrowed the book "alien contacts and abductions" write by Jenny Randles.She got a few cases about the so-called phantasms. they are very dangerous. People who have seen them get temporarily blinded eyes and the light from the devils eyes is very powerful. witnesses get serious sickness after contact.so be careful guys. Has anyone seen such thing?
Star
Posted by Star at 2:03 PM